The Master of Blackmail had secrets worth invading Panama for. His tapes have now been found…

The doctor scanned the crowd as he finished his last cigarette. He stacked a neat pile of coins beside the ashtray, nodding at the waitress before descending the steps of the café. With a glance over his shoulder he turned towards the smoke of makeshift street kitchens, his briefcase a shield against hawkers as they beckoned to exchange wads of foreign notes. Ahead he could see the line for customs, and counted the stalls on his left before slipping from view. Within minutes he had crossed the border, pushing through a grove of banana trees that lined the path into Panama.

Puffs of bright colour burst over the tangled power lines above, and a row of muddy children refused to part as confetti floated and danced between their fingertips. The doctor followed a brindle dog out of the celebrations, remembering that today was the start of a weeklong border festival. It was an unexpected welcome home, but now was not the time to celebrate. With a grimy sleeve he wiped the sweat from his forehead. He wished that he could also wipe away the stares now crawling over his famous Mediterranean features and distinctive sideburns.

The man at the front of the bus shelter had the flattened face of a boxer, with narrow eyes and a leering grin. The smell of his tobacco filled the doctor’s mind with unnerving memories as he passed, stopping at a ticket office that was locked behind rusted steel bars and windowpanes peppered with diesel exhaust. The doctor surveyed the empty shelter, avoiding eye contact with the stranger. He watched as an elderly lady shuffled in, licking at her fingers and absently kneading her hair. The stranger continued to stare. Almost instinctively, the doctor’s hand began to move over the snub-nosed pistol buried against his thigh. He was about to make eye contact when the shelter vibrated with the wheezing of a battered white bus.

The doctor waited until the lady had ascended the steps of the bus before offering to help her into a seat. She smiled, allowing him to support her by the elbow as the stranger shoved past them and spread out in the back seat.

The bedlam of Paso Canoas disappeared in a swirl of dust and exhaust. The driver wrestled through the gears, urging the bus across a narrow bridge and then upwards into open farmland. Coffee plantations spread northwards to the foot of the Cordillera Central, where the peaks of jagged volcanic bluffs cradled the dark green glow of cloud forests.

The doctor opened his window. The familiar Chiriquí air added to his confidence that the worst was over. His thoughts turned to the journey ahead – the shocked faces, the hugs; the mission. Images of his past flickered over the windows – Panama before Noriega, his days in parliament, the many times he cheated death as a guerrilla fighter in West Africa, in Guatemala, Nicaragua and Costa Rica. But now, with his hair turning grey at the edges, this mission meant more than ever.

The bus rattled over another bridge where a row of fishermen looked up as they pulled nets from the river below. A ridge of palm trees opened into a view of the town of La Concepción. Pick-up trucks filled with vegetables, sugarcane and fish crates crowded the road into a leafy square at the centre of town. The footpaths were bustling with tents and stalls being erected for the start of the weekend markets. The bus edged to a stop beside a cement-rendered dental clinic.

Amongst the crowd were growing clusters of men in military uniform. Locals began to stop and stare, and the street music dulled as the men surrounded the bus. The doctor smiled wryly, shaking his head. There was no way they would attack him with this many witnesses.

The stranger stood up from the back seat, cracking his neck and moving forward. Still shaking his head, the doctor allowed himself to be escorted into the crowd outside. He pulled against the grip on his arm to give the driver’s assistant a handful of coins, winking at him, then raised his passport into the air.

The crowd began to shout and cheer, many of them recognising the famous revolutionary. But the cheering quickly turned into screams as the soldiers locked and loaded their weapons.

By nightfall the town of La Concepción had fallen eerily silent. Within a white military building dark red blood dripped over the edge of an interviewing table. On the table rested a telephone, its coiled cord extended to a solemn face.

“I’m being put through to the General,” the face rasped in Spanish.

Other faces watched intently, one of them pushing the doctor’s struggling head back into the blood and tightening his gag.

The face with the telephone receiver became taut as a distinctive voice came across the wires. “General Noriega?” the face grated. “We have the rabid dog.”

On the end of the line, Panama’s dictator paused. His pockmarked cheeks could almost be heard cracking into a smile. He responded slowly, his voice draining into a hiss. “And what does one do with a dog that has rabies?”

Owen gripped the side of the boat tightly, his glasses becoming fogged as he peered into a twisted web of mangroves. It was the first time that he had heard real gunfire, and the shock was reverberating outwards from his stomach to his fingers, his muscles tensing with each echo in the morning mist. Four men stood beside him, unperturbed by the shots. They had turned off the small outboard motor, replacing their rifles with oars as they slowly patted through the shallows. Their faded baseball caps were wet from brushing the leaves above. Droplets of water ran down their military jackets and onto Owen’s guitar case that lay on the floor of the boat.

“Llegamos?” one of the guerrillas whispered. “Si, si,” replied another. A snapping of mangrove roots brought the boat to a sudden stop. Two of the men leapt out, tying the mooring rope to a gnarled tree trunk and motioning for Owen to follow. Another round of shots rang out, closer this time, and Owen quickly pulled his backpack over his shoulders. He followed the men out of the mud, through a network of clutching vines and onto a narrow track. He struggled to keep up as they dodged between giant ferns and mossy limestone boulders, the thick smell of decaying leaves gradually dissolving into the taste of smoke and burning bacon rind. Images of backyard barbecues in summer beside the pool stole his attention and he breathed in deeply. He pushed through a layer of wet palm leaves and into a large clearing bordered by a series of canvas tents.

Owen’s stomach began shuddering again. Inquisitive faces guided him through the fireplace to the entrance of the largest tent. The soldier escorting him stopped at the tent flap and cautiously peered inside. “Doctor?” “Si?” boomed a voice from within. Owen’s fingers and toes tingled sharply and he carefully wiped back his curly brown fringe. The soldier turned to him and nodded, motioning for him to enter the tent. He dithered, his knees bending, then slowly stepped through.

A dancing kerosene lantern illuminated a carefully arranged interior. Cabinets were filled with files, medical books, first aid kits and plastic medication cases. Two AK-47s were propped against a cabinet stacked with boxes of tobacco and cigars. An old set of scales sat atop a desk covered in bullet shells, clamps, measuring spoons and boxes of gunpowder. A fluorescent light hung from the central tent pole over an elevated stretcher bed. On the bed lay a shirtless soldier, facedown and glancing up painfully at Owen, sweat dripping down his nose. The steady, gloved hands of a doctor moved over the soldier’s back holding a pair of tweezers and carefully threading stitches across an open bullet wound. A glass of bloodied bullet fragments sat beside the patient’s head along with a large, empty syringe.

Owen gulped. He tried to make eye contact with the doctor’s rugged, unmistakable face. It was a face famous across Latin America, and sure to be hanging on CIA pin boards like that of Che Guevara and Fidel Castro twenty years before. 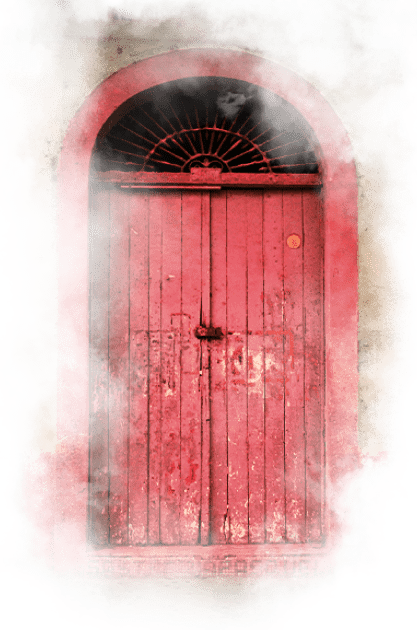 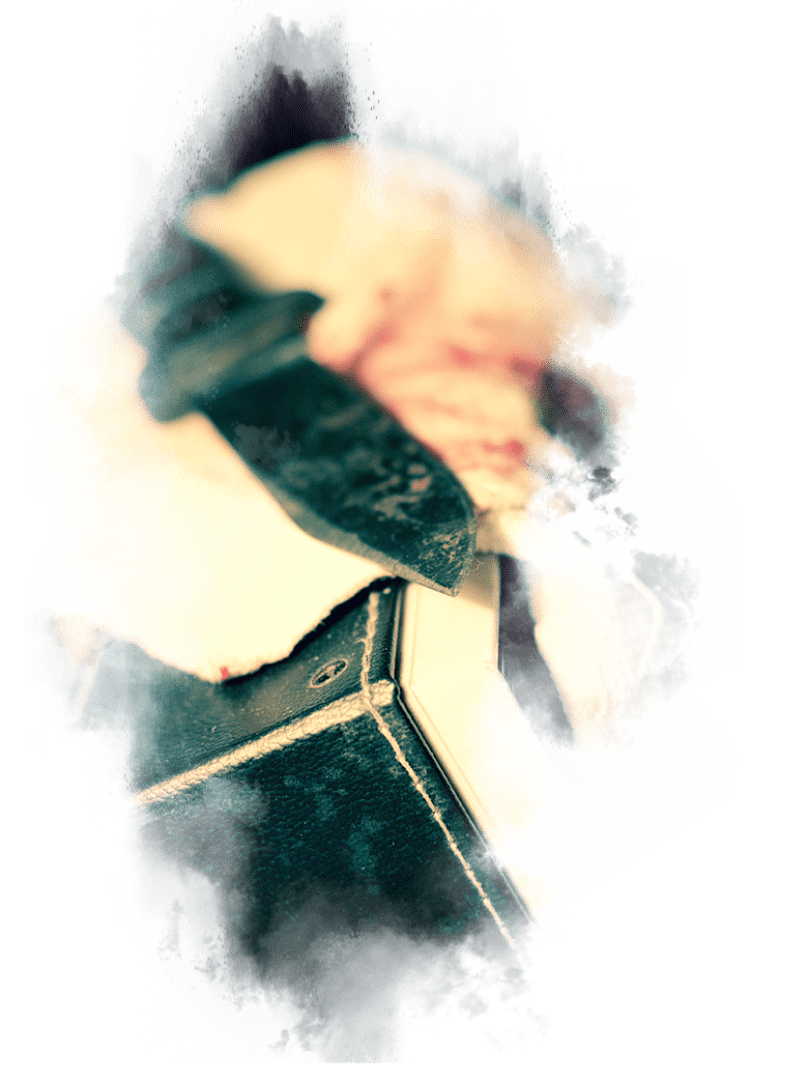 A sudden crunching of gravel added to the hammering of raindrops on the tin fence. Jenna tried to peer through the fruit trees to see who was on the driveway, but the leaves reached too high. Turning back to the tree trunk, she noticed a thick spider web that had been brushed aside, and hastily wedged her hand into the hole that it had covered. Sure enough, her fingers wrapped around a folded piece of paper. She unfolded the note in the protection of her jacket. Her eyes narrowed at her mother’s uncharacteristically messy handwriting.

Jenna shook her head in confusion, stuffing the note into the back pocket of her jeans and staring fearfully into the gale. A low rumbling reverberated through the ground, followed by the distant drumroll of thunder. She shivered, slipping off her flats and splashing through the mud. Wet leaves slapped at her cheeks as she pushed through the fruit trees and into the open grass beyond. She parted the tousled hair from her eyes and inhaled in shock.

Three police cars blocked the cul-de-sac at the front of the house, their lights flashing off the pine trees beyond. Parked in the driveway were two grey vans, their back doors being pulled open by gloved men in black rain jackets.
Jenna’s heartbeat pounded violently as she began to creep around the house. She dropped to her hands and knees and peered through a low privet hedge.

“Miss Martinez.”
Jenna spun around. Standing calmly behind her was a stocky man in a black trench coat, his face partly hidden behind a wide black umbrella and his exposed neck mottled with scars. His coarse voice had wrapped around her surname with a distinctly Latino accent, and the wrinkled olive skin of his cheeks had seen far more sun than could ever be found in England.

“What do you want?” Jenna stammered as she rose shakily to her feet. “Who are you?” The man ignored her, carefully stepping over the hedge and waiting for her to follow him to the front of the house. “Hey! What is going on?” The scene became a blur of blue and red flashes, umbrellas and foam coffee cups. The men in black jackets entered the house from the back, unlocking the front doors and pulling open the garage. Jenna’s shouts were ignored as the men began marching back and forth carrying desk drawers, files and boxes that they loaded unashamedly into the vans. One of the police officers pulled her away from her desperate grabs at the men, wrapping a plastic poncho around her and escorting her to one of the police cars. He opened a clipboard beside her, explaining to her a search warrant that was quickly dotted with rain. He tried to leave the clipboard in Jenna’s hand, but she threw it back at him, shouting with rage and struggling against his wet grip on her arm. All the while the Latino man watched from the front door. He tucked his phone into his coat and continued to stare at Jenna, ignoring her shouts as he carefully squeezed a capsule of tomato sauce into a brown paper bag. He swallowed his pastry slowly, his nostrils twitching as if tasting the air. When he looked up again the back door of a police car had been shut, and Jenna’s cries were being driven into the storm.